One of the simplest forms of home electrical repair is resetting a tripped circuit breaker. Believe it or not, knowing how to do this single thing can help you solve the majority of all home electrical problems. That way, rather than calling an electrician out for a cost service call, you can begin the troubleshooting process yourself. If you are able to fix the problem with this simple repair, that’s great. If not, then you know that you’ve done your best, but it’s time to call out the electrician.

Circuit breakers are designed to trip to the off position whenever they become overloaded. In order to restore power to that circuit, you must reset the breaker. All of your circuit breakers can be found in your electrical panel, which is typically located in your garage, basement or near your water heater. After you have found your breaker panel, determine which breaker has been tripped. This is pretty easy to do. Simply inspect your breakers to see which one is in the “off” position, or somewhere in between on and off. To reset it, simply push it to the off position, and then flip it back to the on position. If all goes well, this should restore your power.

Circuit breakers will shut off the flow of power to a circuit under the following circumstances:

A ground fault occurs whenever a ground wire comes into contact with the sides of the metal box that it is housed in, or a hot wire. It is a form of short circuit, and requires repair if it is the culprit.

Whenever you plug more appliances and devices into a circuit than it can handle, it will cause the circuit to become overloaded. Whenever this happens, the circuit breaker is designed to detect the excess electricity flowing through and cut off the flow of power. This helps to ensure your safety by stopping a potentially dangerous amount of electricity from entering a single circuit.

Whenever a hot wire comes into contact with a neutral wire, or any other conductive surface, it will cause the circuit to short. This type of electrical issue can be very troublesome, as it is often difficult to identify the exact place that the short occurred. In most cases, a short will be marked by a burning smell, charred or melted wires, or discoloration. When this happens, the wiring must be replaced in order to prevent future issues.

Regardless of what has caused your breaker to flip, knowing how to perform this simple home repair repair is an important part of being a homeowner. This is the first step to solving almost any electrical problem. Before resetting the breaker, always think about what may have caused the breaker to flip in the first place. If an appliance could have caused it, unplug the appliance before resetting your breaker. Otherwise, try and identify what the issue could have been. If you are unable to determine the cause, or the breaker trips frequently, call your local electrician for more assistance. 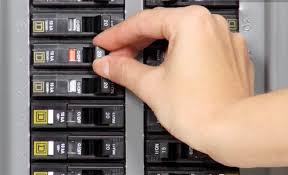 How to Check and Reset a Tripped Breaker

When your breaker gets overloaded, it shuts off to prevent the circuit from receiving any additional electrical flow that could cause damage or fire. It may seem like a hassle to have to check the panel, but this switch off can prevent a lot of potential damage from happening. Follow these simple steps to restore power and get your electronics up and running again.

If the breaker shuts off again, you might have a short in the panel. Still unable to restore power? A backup generator can be a cost-effective, temporary solution until you can contact an electrician. 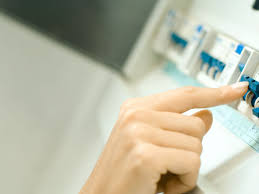 HOW TO TROUBLESHOOT BREAKER RE-TRIPS 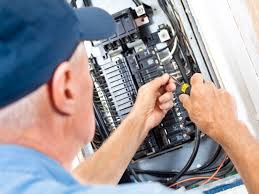 How a Circuit Breaker Works

A circuit breaker is a type of electrical switch that controls and protects the wiring circuits that feed outlets, fixtures, and appliances in your home. These special switches can be used as simple ON/OFF switches to turn off circuits to make repairs and improvements, but they also have a special design that allows them to shut off automatically when too much current is flowing through the wires, or when there is a dangerous circuit interruption known as a short circuit. They also shut off the power in the event of electrical surges, such as if a lightning strike suddenly overwhelms the household wiring with too much voltage. The automatic function of circuit breakers offers critical safety protection to the wiring system in your home since the excessive voltage can cause fires or ruin appliances.

The Do’s and Don’t of Resetting a Tripped Breaker

Do turn off lights and unplug your appliances before resetting. It’s always best to ease your house back into power rather than turning on many power-suckers at once. Unplugging your appliances and plugging them back in one-by-one after a reset can help you gradually restore power in your house, and also identify any appliance that may be overloading the circuit

Don’t touch exposed wire or metal parts, only touch plastic switches. There are actually several parts inside your breaker box that are uninsulated and running with a high voltage electrical current. To avoid electric shock, don’t touch anything other than the breaker switches inside your electrical panel.